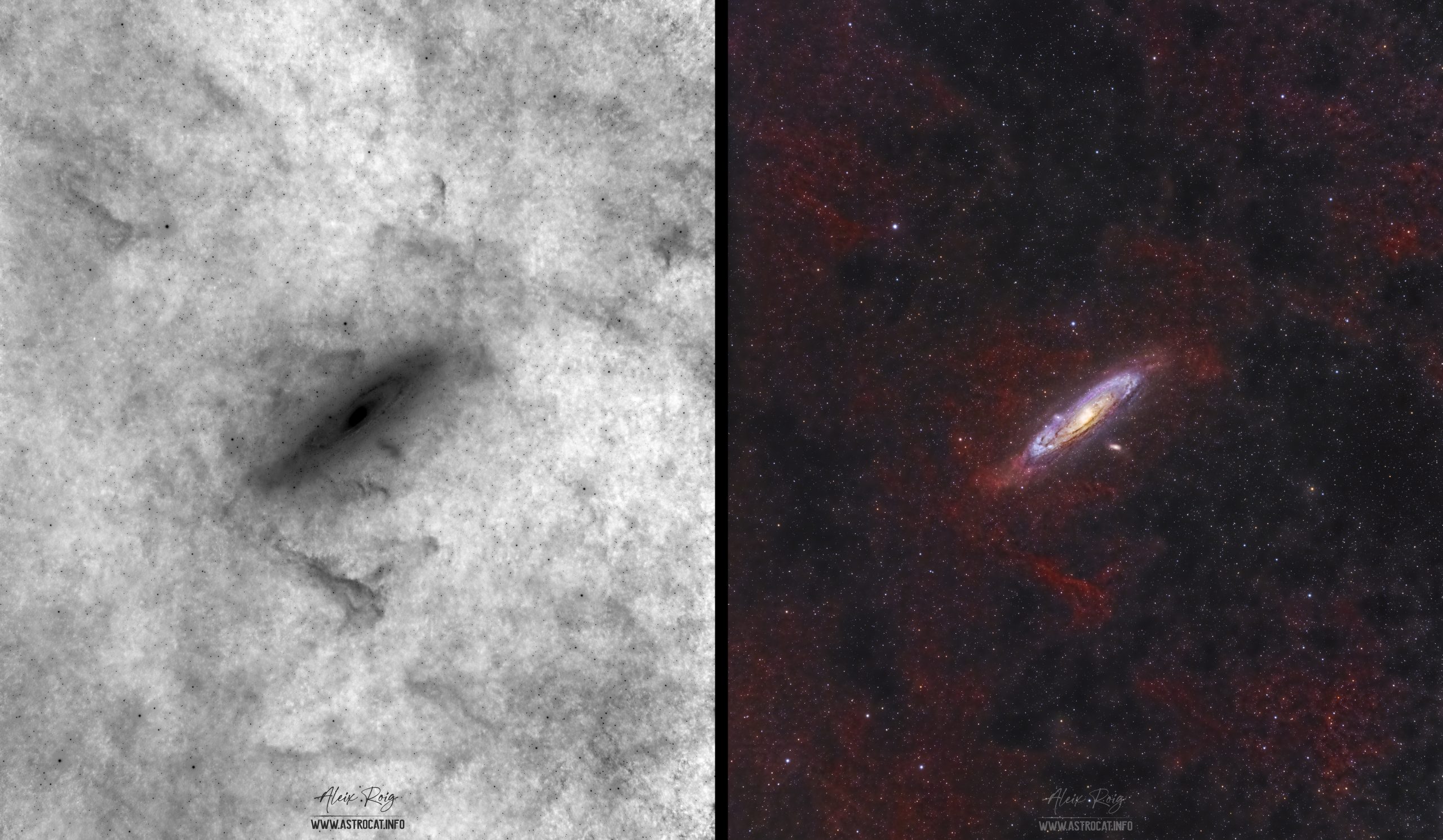 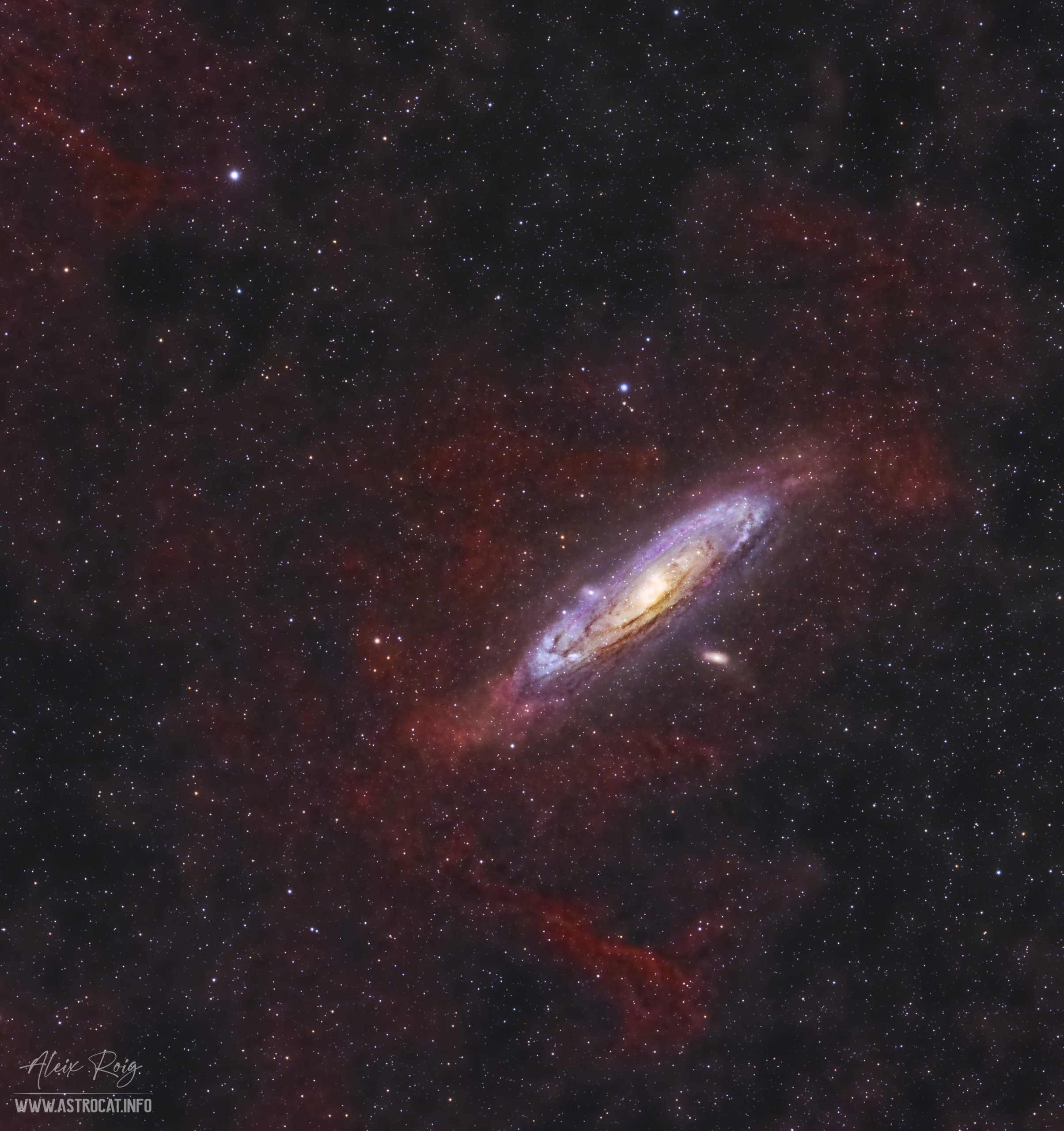 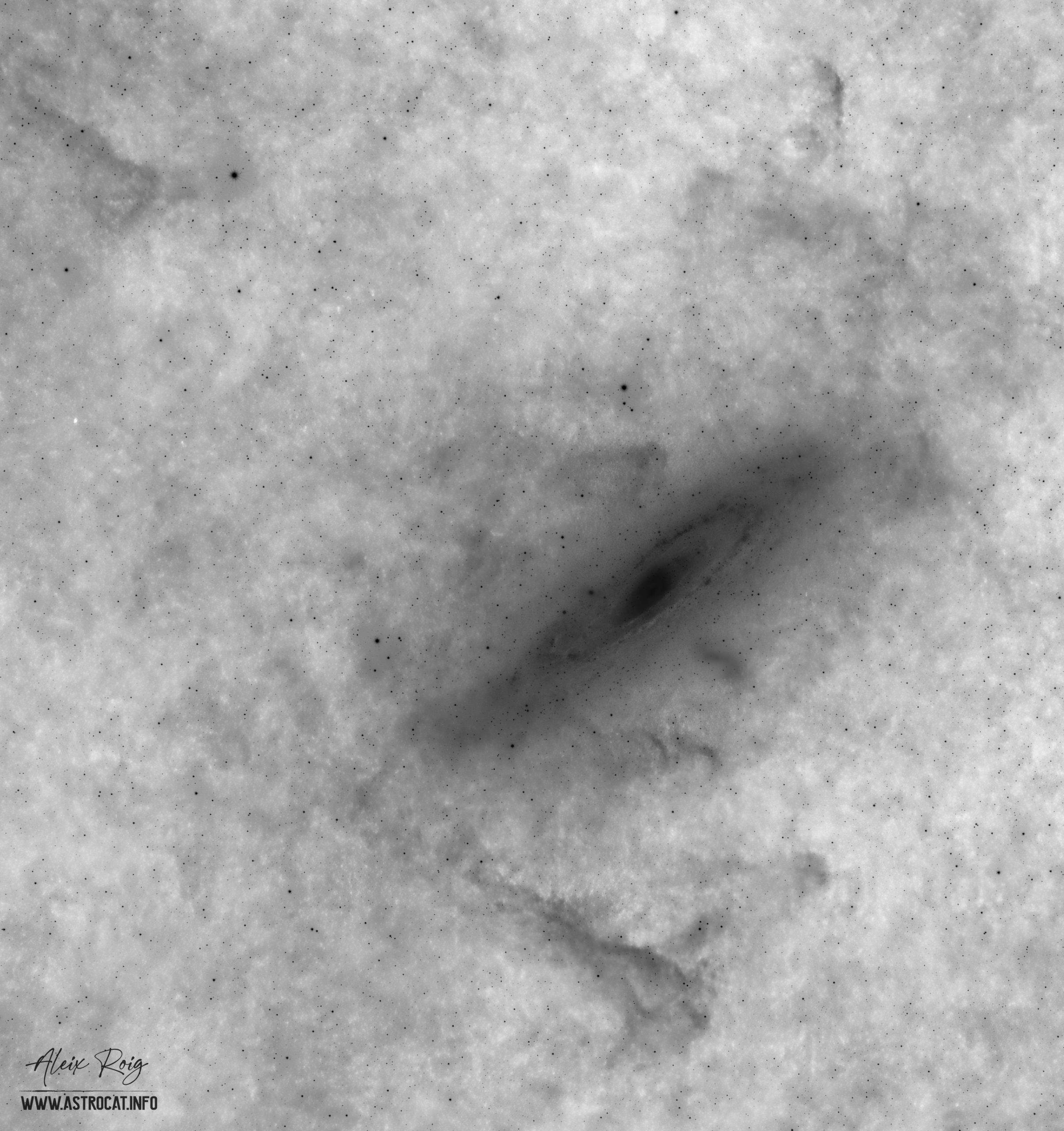 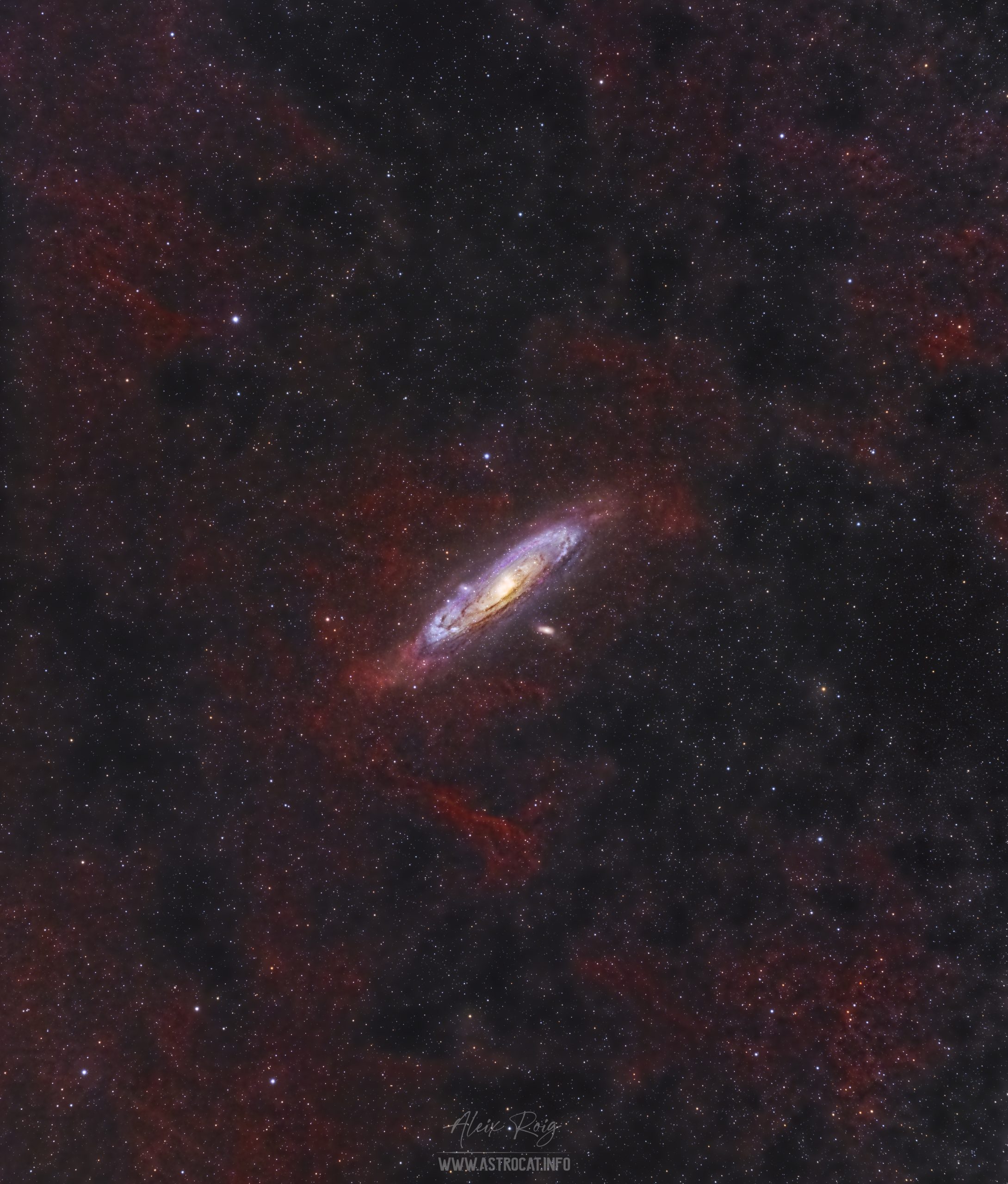 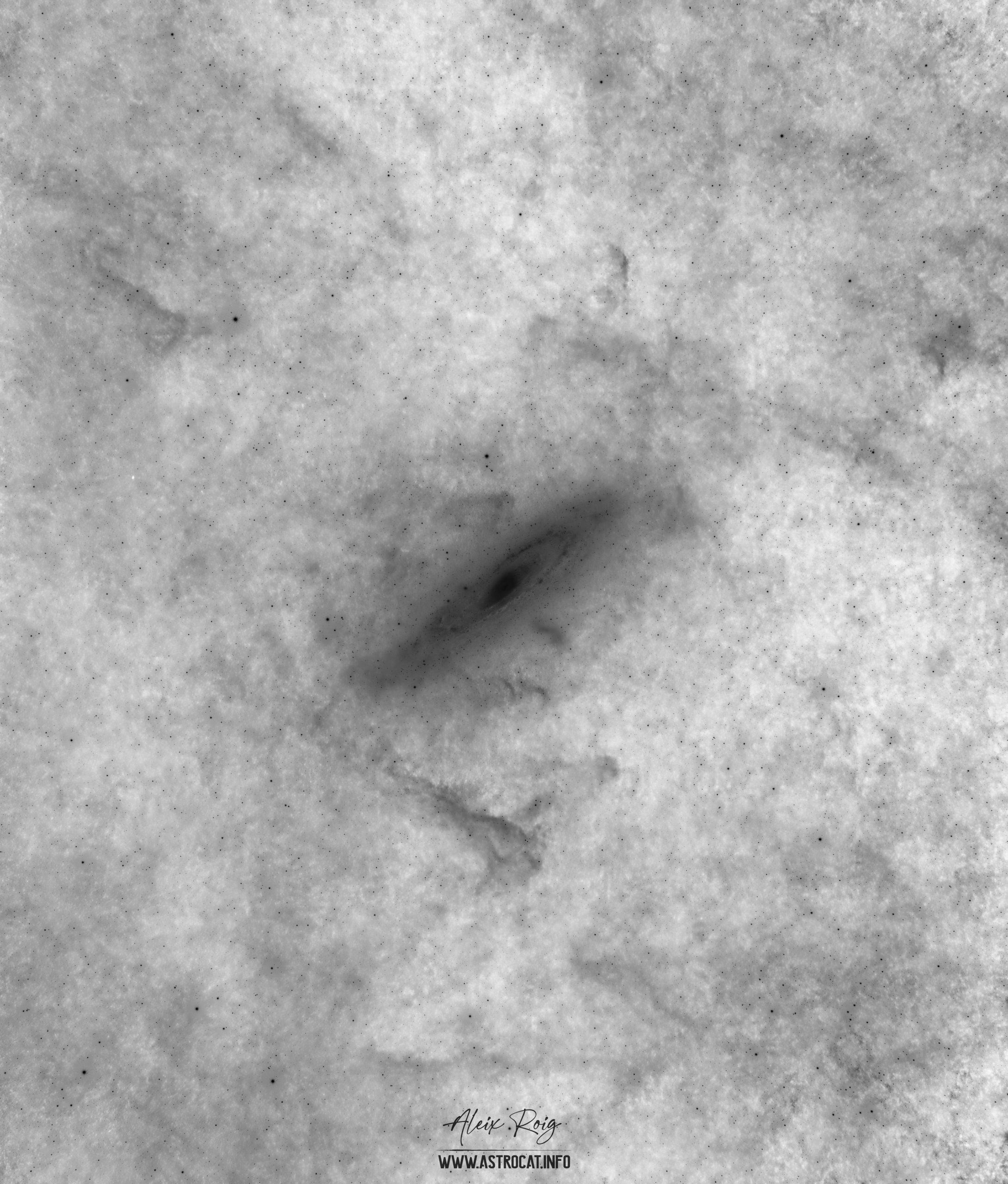 A deep integration time on a wide field image of Andromeda Galaxy (M31), using an Ha filter, shows an amazing view that has been recently called the Clouds of Andromeda. A faint structure of Galactic Cirrus, part of our Milky Way. The image covers a diagonal that could fit 38 full moons inside.
As soon as I saw Rogelio’s Bernal 2017 image of Andromeda (see the APOD here) I knew I wanted to get such a deep view of this area. As the time went by more images appeared, most of them showing a detailed (crop) view. This 2021 I acquired a new widefield astrophotography setup specially designed for this project. It consists of a regular DSLR lens (a Sigma Art 85mm) and a new CMOS camera matched with a full set of filters.
As I started integrating the data in the Ha channel (3nm Ha narrow band filter) some really faint clouds appeared. But it was not until I got around 30h of data that it was possible to do a full processing of this image showing the faint Galactic Cirrus that surrounds this area of the night sky. I captured all the Ha data stopping the lens at f/2.8. But the star shapes were not good enough, so I combined the RGB image of the stars captured at f/4.0 (thanks Daniel for this great idea).
My interest in Galactic Cirri started several years ago when I started my collaboration with the Instituto de Astrofísica de Canarias (Drs. I.Trujillo and R.Infante) in a low  surface brightness study of the M101 Galaxy. You can see this project here: https://astrocat.info/pro-am-science/


See this other version of this work with an airplane crossing the field just across the center of M31 core: https://astrocat.info/clouds-of-andromeda-as-a-bulls-eye/