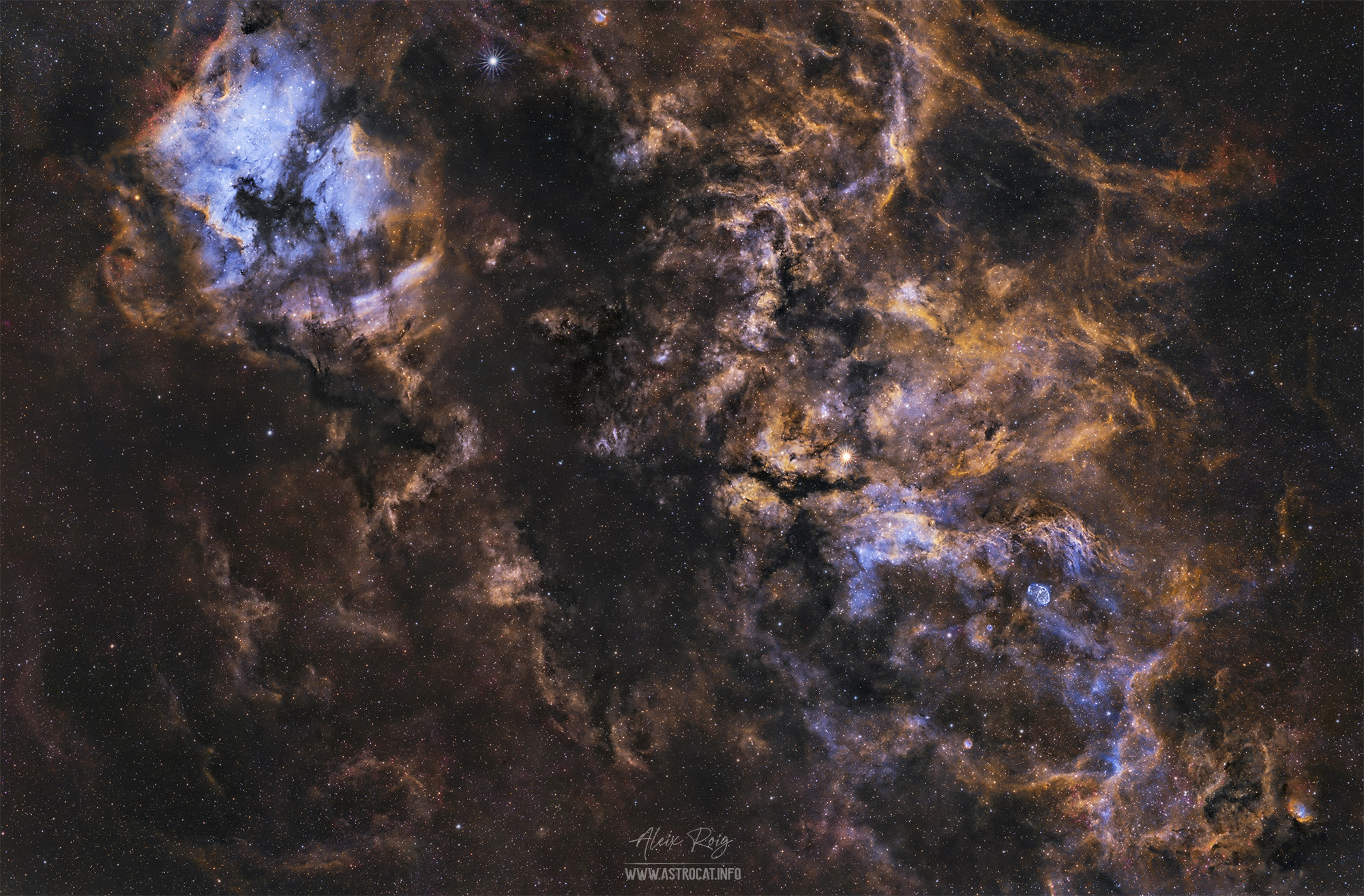 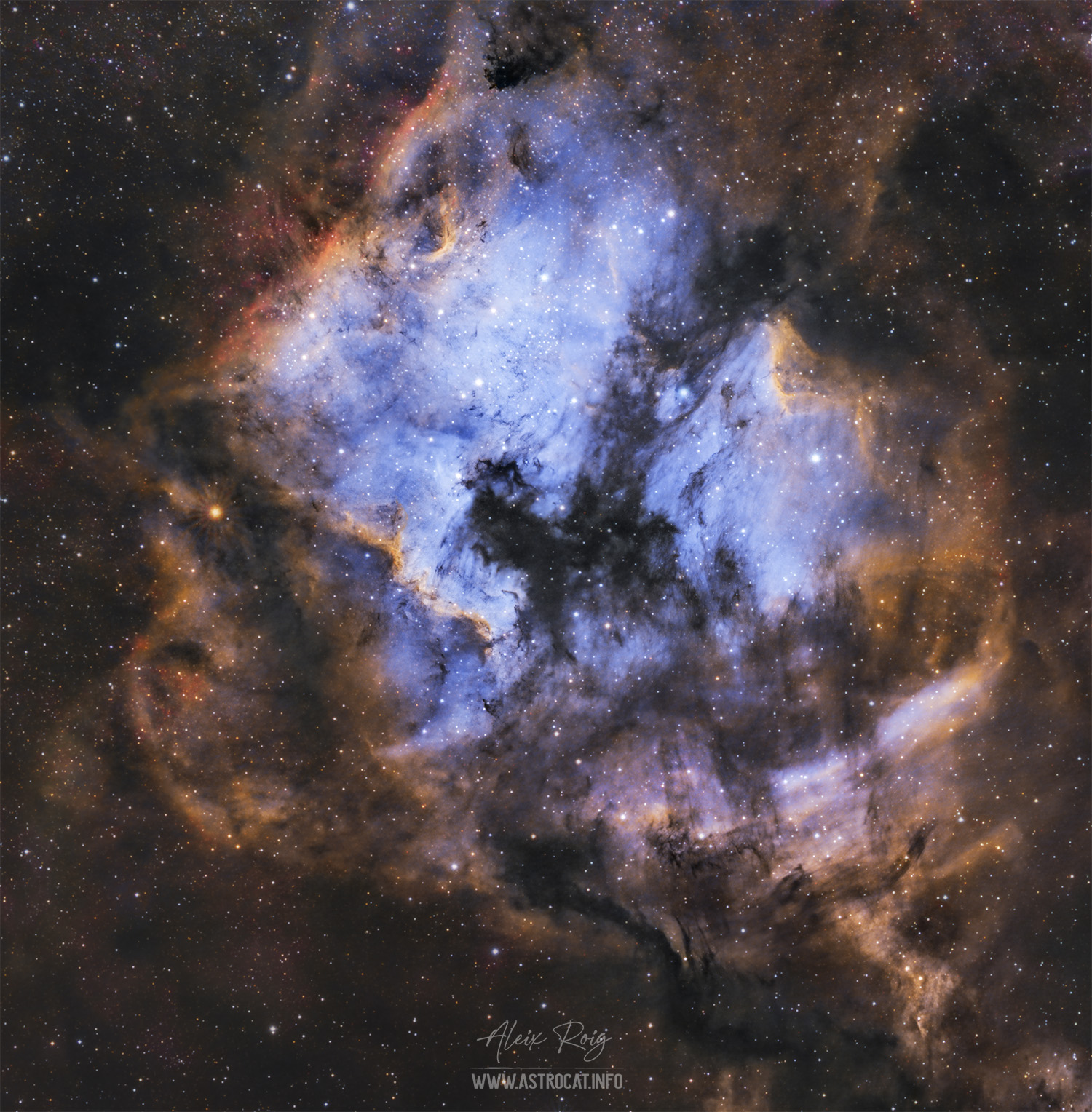 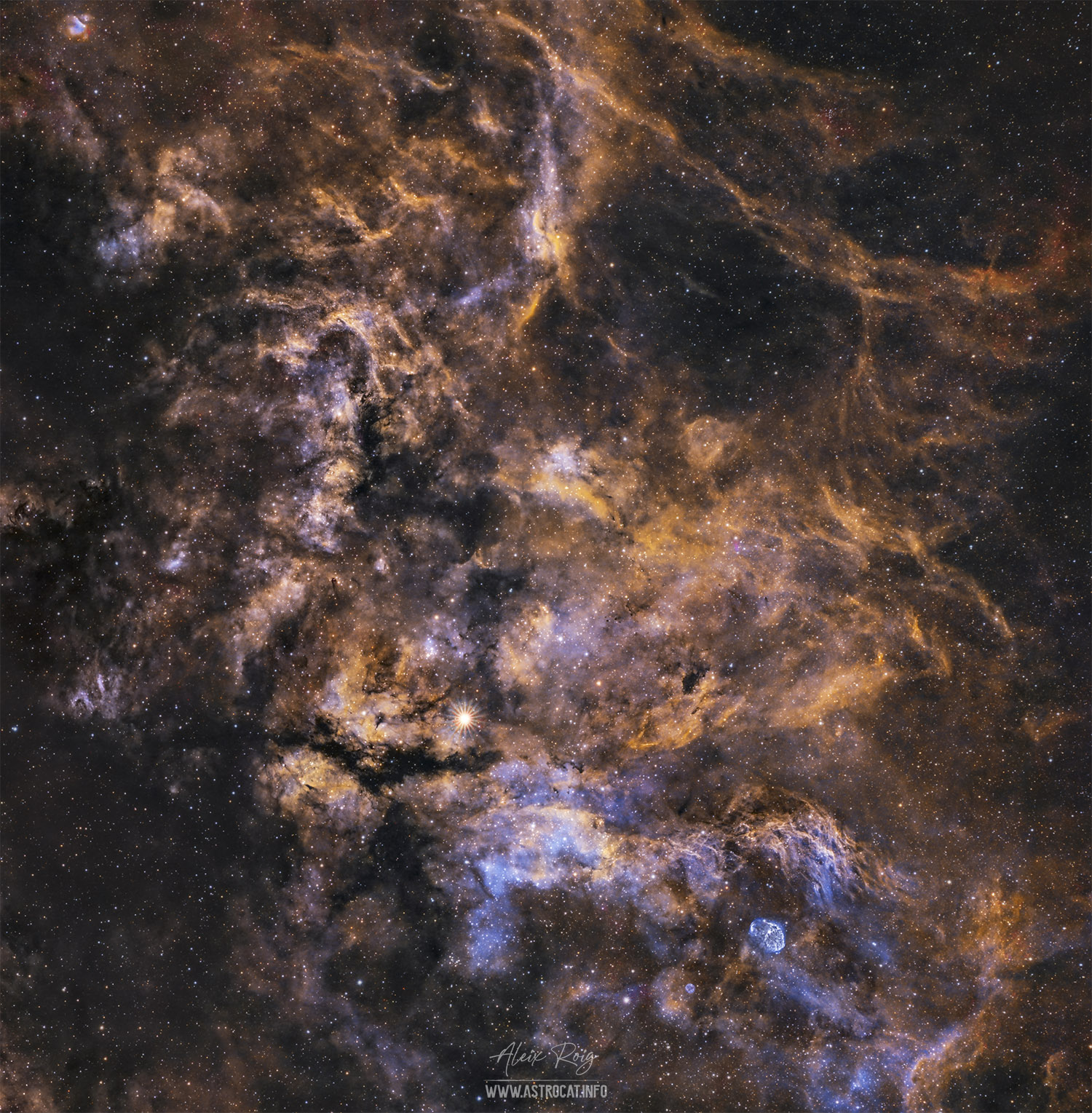 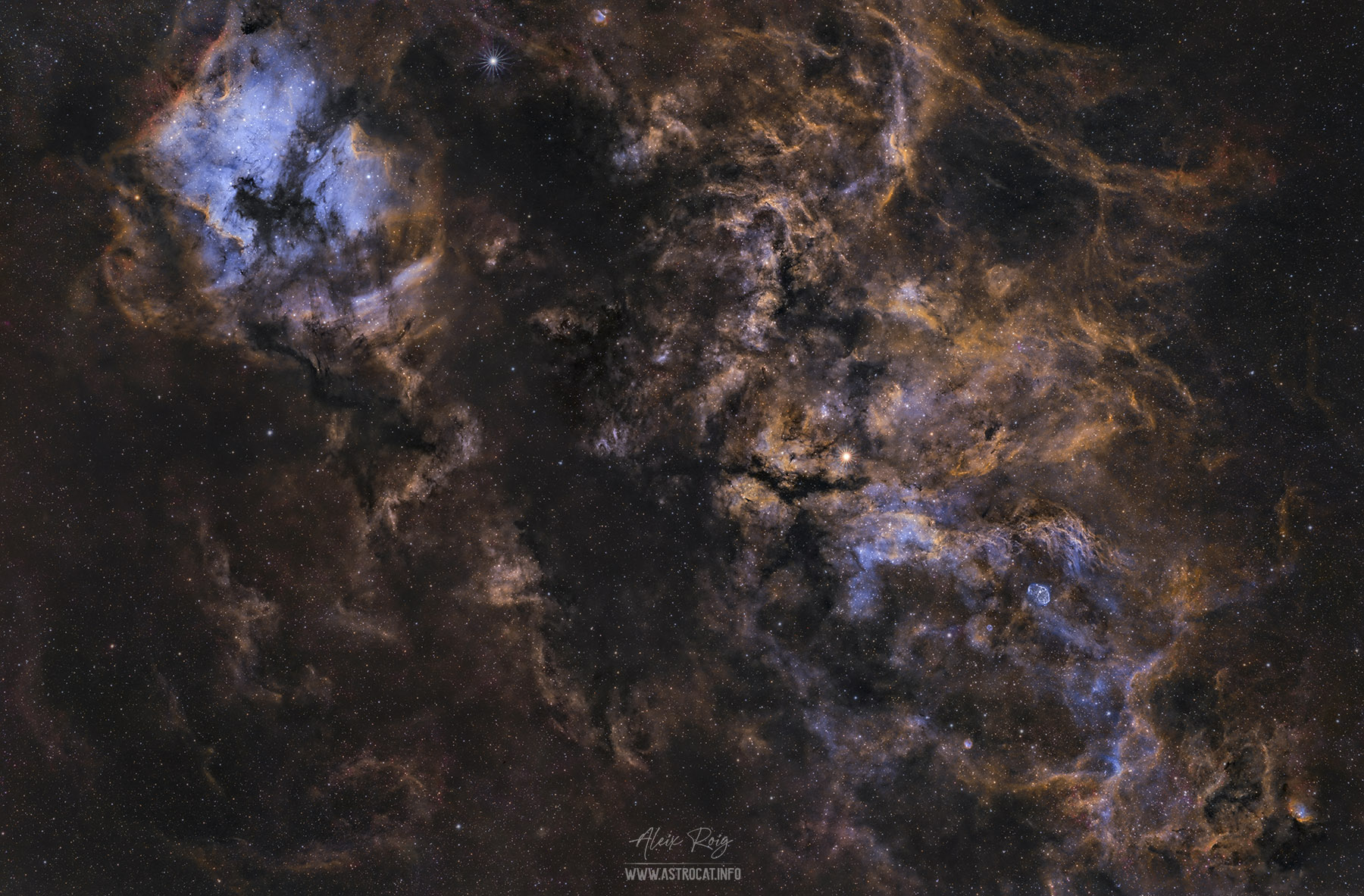 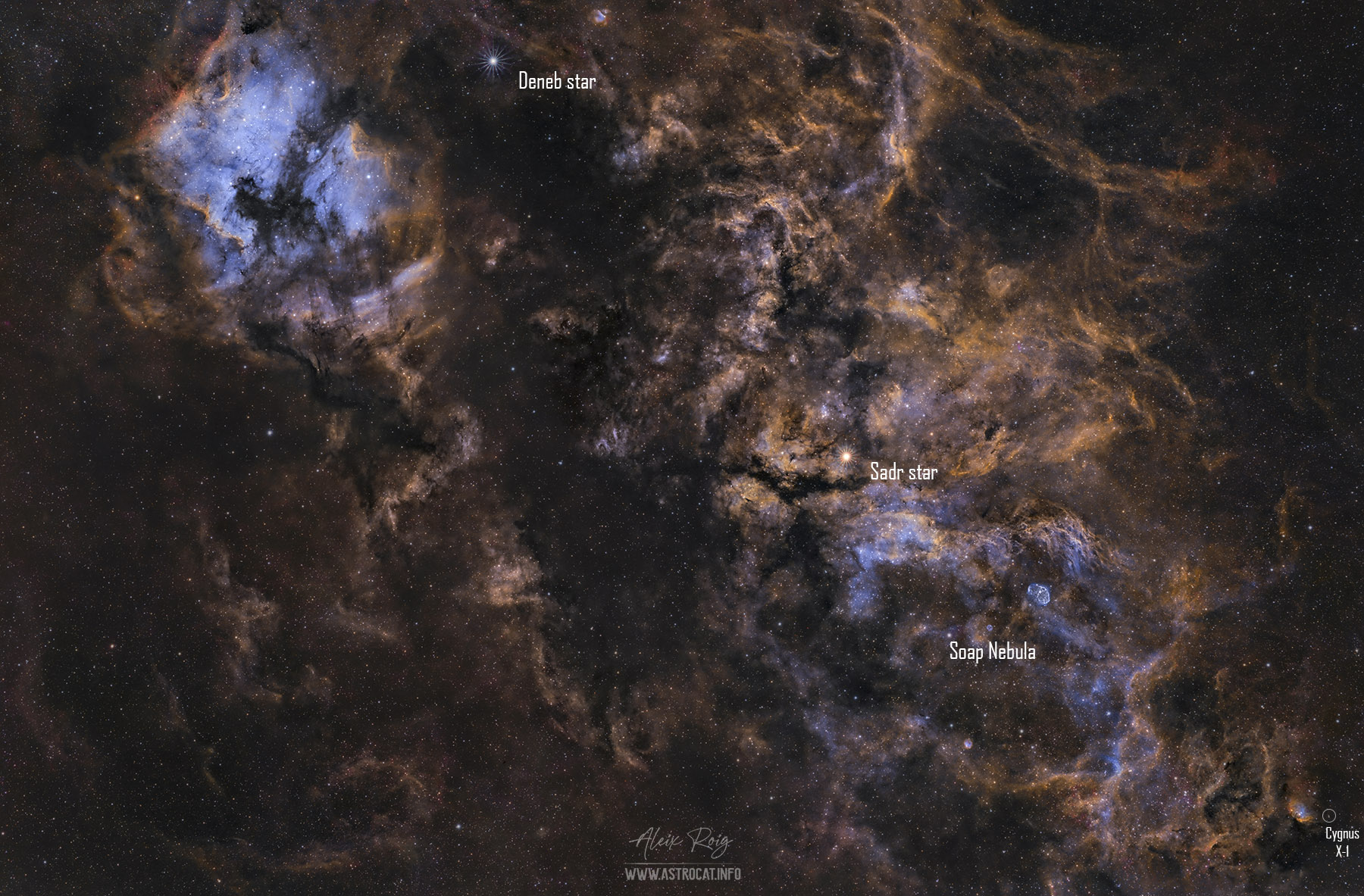 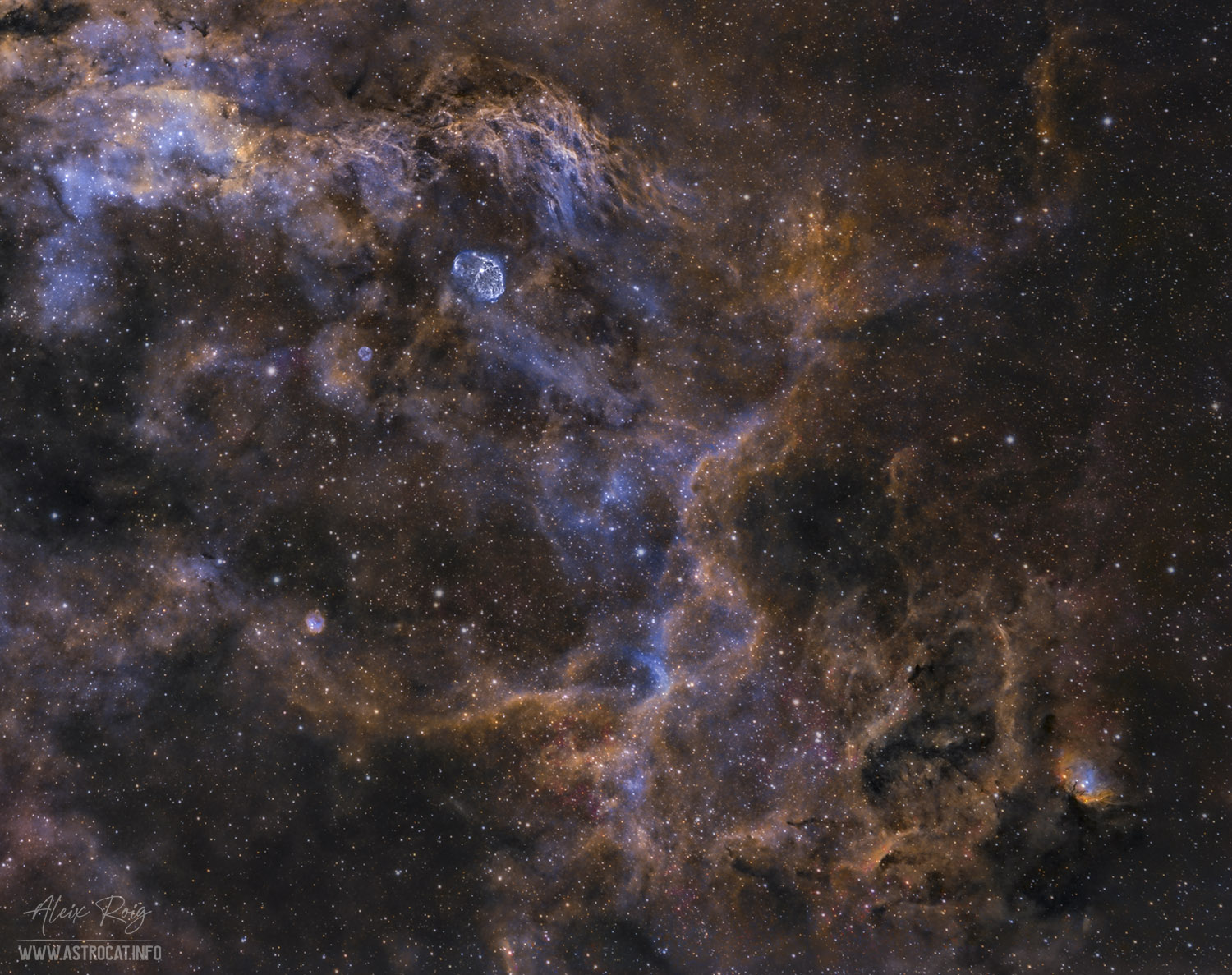 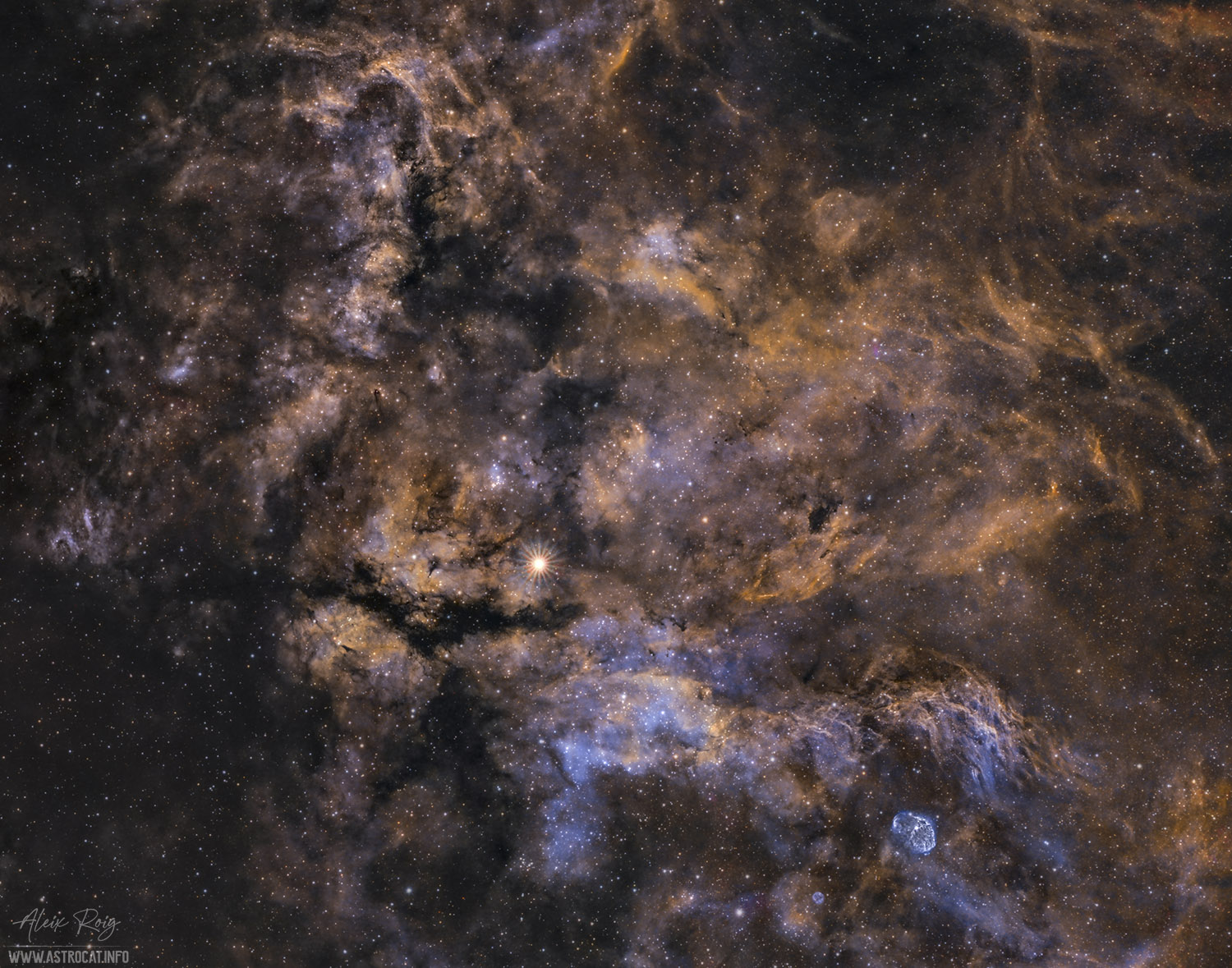 The Cygnus constellation hosts some of the most amazing deep sky objects thanks to its location just on the galactic plane. It also features an asterism called the Northern Cross. This constellation can be easily detected by naked eye from suburban skies during the northern hemisphere summer.
During the years I’ve had the privilege to capture images of this region from my backyard observatory located under a nice dark sky in my home village of Prades (2h south from Barcelona). Dark skies allow to stare at the beauty of our Milky Way crossing the summer night sky all along the northern summer.
This image, with a total integration time of more than 170 hours, is the result of the work I’ve been doing during the last four years. All this time I’ve been capturing several images of the Cygnus constellation with different telescopes in order to obtain a high resolution wide field image of this amazing Milky Way region. As the time went by I also published some details of this area such as a recent image of The Crescent Nebula, NGC 6888.
High quality data, captured with the Takahashi FSQ85, has been added to a widefield image captured with my new Sigma Art 85mm. The use of a standard camera lens made this project even harder due to the difficulty to get pinpoint stars across the full image. The integration of all the panes turned out to be quite difficult. I would like to thank Colm O’Dwyer that helped me in order to combine all the data with Astro Pixel Processor. I finally used different tools combined to blend all the data: PS, PIX and APP.
The final result shows the great emissions that come from several bandpasses of the spectrum. I’ve chosen the well known Hα, [OIII] and [SII] filters to gather enough data to show a coploured image. A variation of the well known Hubble palette has been used to map the colors as it follows: sulfur data to the red, hydrogen data to the green and oxygen data to the blue. I added some hydrogen data in the red and blue channels, and also some oxygen data in the green channel. I  decided to use this combination in order to highlight all the emissions that come from this vast region trying to give it a more natural taste.
“From The Cygnus Wall to the Black Hole Cygnus X-1”
This project image aims to show very different astronomical objects in one single image: from the amazing star forming regions on IC 5070 (The Pelican Nebula)  and NGC 7000 (North America Nebula), such as The Cygnus Wall, a cosmic ridge that spans about 20 light-years, to the very first black hole ever detected, the Cygnus X-1. Along the diagonal of the field, a blue-white supergiant first magnitude star, Deneb, the Alpha Cygni, and also Sadr, a multiple star system located in the Northern’s Cross intersection. Around this star we find The Gamma Cygni Nebula, shown with nice detail thanks to the high resolution data from the FSQ85. The two other highlights of this wide field image are The Crescent, NGC 6888, and the Soap, PN G75.5+1.7, Nebulae, a faint planetary nebula recently discovered by an amateur astronomer. The Tulip Nebula, Sh2-101, closes the magic line with the Cygnus X-1 black hole at the very bottom of the image.


With  the Takahashi FSQ85:

Parallel guiding with ASI120MM and ZWO guidescope, for the Sigma Art 85mm images and the Cygnus details captured with the FSQ85 in 2021

This work has been selected as a top pick  image on Astrobin: https://www.astrobin.com/h808fj/