Galactic Cirri across the Double Star Cluster in Perseus 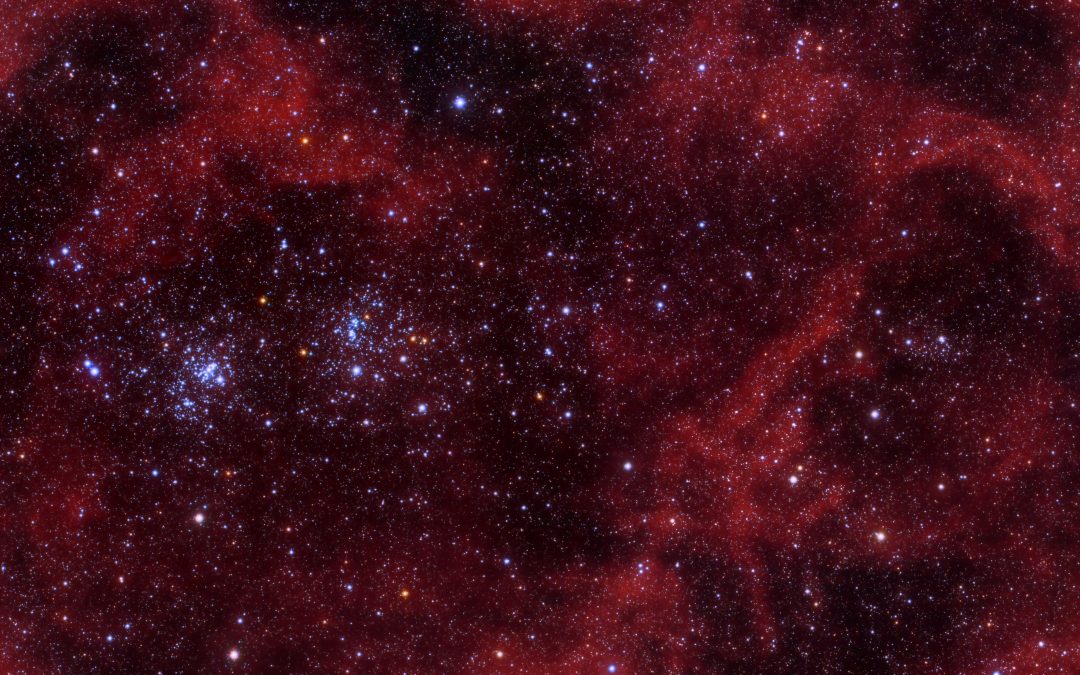 In the line of sight of this magnificent concentration of stars, in the constellation of Perseus, we can see the complex structure of the interstellar dust from our own galaxy. Known as Galactic cirri, this faint reddish background is mainly composed of ionized hydrogen gas. The use of really deep sky images reveals a complex cloud of gas that has been rarely spotted by other telescopic images. While a very popular astronomical target, this pair of open star clusters, NGC 869 and NGC 884, can be easily detected, to the unaided eyes, from dark skies, showing a bluish glare due to the concentration of blue-white super-giant stars. The total mass of the complex reaches the 20,000 solar masses, including a very extensive halo of stars that surrounds both clusters. Based on the individual star ages of each cluster, both were born some 12.8 million years ago, which makes us consider them a young star formation region. On the right side of the image can be seen another open cluster, NGC 957, that is thought to have a common origin with the Double Cluster in Perseus. The triad lays some 7,000 light-years away from Earth.

Two pane mosaic with a total exposure of 77h07’

Acknowledgements: I would like to specially thank the advice given by Dr. Ignacio Trujillo in order to improve the description of the image with accurate scientific information, and to Mr. Josep M. Drudis that gave me his personal feedback about the resulting image. I am also very thankful for the inspiring and pioneer image of this starfield made by Fabian Neyer back in 2011.

Now more than ever “if we have seen further than others, it is by standing upon the shoulders of giants” (Sir Isaac Newton).